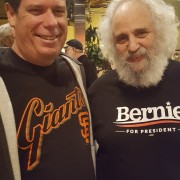 This is from David Grisman’s CD release party last night at the Freight and Salvage in Berkeley. It was a great show, with

a guest appearance from Mike Marshall for the encores. David considers his new album (David Grisman Sextet) to be

some of his finest work. It was recorded and mastered here in Sebastopol at Studio E. David plays on a song I wrote about

the Grateful Dead called Skeleton and Roses on my upcoming album. It won’t be out for a year or so but you can listen to

a solo acoustic version on a KOWS radio interview which is on my website. www.ScottSmithBand.com