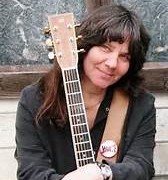 I want to talk about one of the artists that played on my album, which is Nina Gerber.

She is a local big name who has played with just about everybody. I first fell in love with

Her playing when she performed with Kate Wolf. Sadly, Kate passed on at a very early age

And Nina rose to fame playing with artists like: Nanci Griffith, Karla Bonoff, Dave Alvin and Chris Webster. She owns the audience when she performs with her extraordinary Craft.

Nina played on three cuts, The Sum of Life (along with David Laflamme), and smoking slide guitar

on; Over it Soon and Messing with Reality. She will also appear on my next album with more awesome

lead on Drop Kick it.

One note: on the acoustic instrumental The Sum of Life, Nina played Kate Wolf’s guitar.