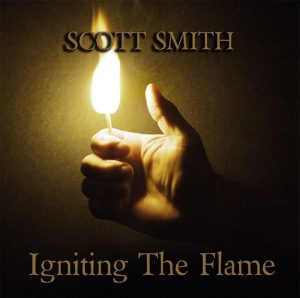 Scott Smith is an Americana Rock artist out of California. Scott has a passion for powerful music that lifts your spirits and gets you moving. Inspired by the early origins of American music, Scott takes an Americana sound and adds elements of blues rock to create something fresh. His most recent project ‘Igniting the Flame’ is a stand-out example of his passionate work.

Scott Smith has delivered an Americana, folky, blues-rockin’ great time on his new album Igniting The Flame.
The opening Drop Kick It introduces us to Scott’s aurally stimulating barrage of sweet guitars, swingin’ horns, foot stompin’ rhythms and a story about letting go of that bad day you just experienced.
Igniting The Flames blasts off with distorted guitars, an upbeat rhythm, gritty but soulful background vocals and enough jam to keep your body rockin’ nonstop. When that fiddle kicks in for the solo, buckle up!
It’s obvious by now Scott Smith has arrived to infect our bodies with upbeat music despite any and all downers that might be attached to his lyrical substance.

Scott Smith delivers a blistering, bluesy take on the classic rock sound with the surefire “Igniting The Flame”. Neatly drawing from folk, country, all anchored within a careful singer-songwriter tradition the pieces linger in the mind. Riffs roll across the luxurious hyperactive pieces. Tempos rush through with a truly muscular presence. By far though the true heart of the collection comes with the strong, poetic quality of the lyricism. Delivered with the utmost of passion everything works in unison to create a spirit that feels positively infectious. Easily the highlight, “Igniting The Flame” simply stuns. From the fiddle work to the backup vocalists, it all adds to a crazed manic kind of energy. Much more laid-back “My Soul To Keep” chooses a leisurely groove, complete with a soulful saxophone adding to the overall tenderness of the track. A shaggy dog story emerges on the flexible, organ led saga of “Rolling Home”. With a bit of soul, the way the piece evolves gives it a sunlit quality. Distortion rules supreme on the playful humorous “Eating Like Hippies”. Incredibly hyper-detailed the song speeds forward in a glorious blur. A western twang emerges on the powerful swagger of “Drop Kick It”. Guitar and organ work in unison on the infectious melody of “Bulls Eye To My Heart” where everything mixes into a majestic whole.
Aptly named, “Igniting The Flame” shows off Scott Smith’s sense of defiance as everything merges into a singular whole. Hey, I’m the album of the week on Blues and Roots Radio. Yeah!

Simple vocal melodies combined with engaging and intricate instrumentals, with a tinge of blues, make the perfect recipe for music you will love to remember and discover. This ones a little honest, but hey, I’m trying to change music. 🙂

A femspårig EP with americana, country and some old rock in up its sleeve is what offered when Scott Smith is making yet another sign of life. Overall, it’s pretty good, feels a little Johnny Cash in his best moments, and although I initially has some trouble for his song so it grows with a few genomlyssningar and I appreciate his wayward and expressive voice. Good lyrics and especially leading Down To Memphis and the gently swinging the Hour Glass is nice songs.