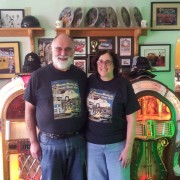 I want you to meet Ralph and Holly Cota. When we came up with the idea of God driving a Cadillac for the album cover, we had to find someone with a vintage Cadillac. It took a lot of searching but a friend met Ralph at a collectors car show. Ralph had a limousine which wouldn’t work but I decided to call him to see if he knew anyone. He said my wife Holly has a 67 Cadillac convertible. She was generous enough to move it out of storage for our photo shoot. I asked if they needed any compensation and they only asked for a signed copy of the CD. So when the CD came out, they were at the top of the list to get a copy. I met with them this weekend and during my initial conversation with Ralph, he mentioned he had some jukeboxes at his house. When I got their this weekend, I had no idea the number of jukeboxes he has. Wow! he like eight or nine of them. He told me over the year he and his son had rebuilt up to 30 jukeboxes. He also at one point had 35 thousand 45’s. I didn’t realize how big of music fans they are and it makes my connection with them all the more sweeter.

Thanks Ralph and Holly! 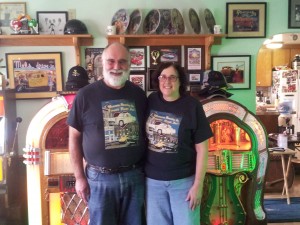 Number One!
Scroll to top